Trouble Came to the Turnip

My older daughter has a copy of Midnight Feasts, a poetry anthology curated by A.F. Harrold. We gave a copy to one of her friends for their birthday, too. I didn't only buy it because it contains This Is Just to Say but it may have been a factor.

One of the poems that has stuck with me is Trouble Came to the Turnip by Caroline Bird. It begins:

When trouble came to the village I put my love in the cabbage-cart and we rode, wrapped in cabbage to the capital.

Each stanza has the same form, with trouble coming to the place they fled to in the previous stanza, and the narrator and their love escaping in increasingly abstract or absurdist fashions. For example:

When trouble came to the nunnery, I put my love inside a prayer book and we repented, wrapped in prayer to the prison.

Honestly, it's a bit abstract for a three-year-old! But it makes this thirty-four-year-old want to build an homage using some word embedding toolkit to generate new parameters. Will I have time during NaNoGenMo 2020?

I've been watching Alice Fraser's Savage. (It's good! But don't expect a non-stop stream of laughs: it's about the more difficult aspects of life.)

At one point, she asks (paraphrasing) if you can remember what it was like to be three years old, eating an ice cream in the sunshine, shirt off with the ice cream slowly dripping down your torso. I can't – I don't have all that many clear memories of that part of my life. Fortunately, I don't have to remember: I can often see with my own eyes what it's like to be three years old and covered in ice-cream. Heaven.

I used to think I was a night owl who worked best late into the evening. Over the last few years, a combination of factors – a family member who wakes up early, nursery drop-off, working from home for a company whose prevailing time-zones are in the Americas – have taught me that I get my best work done in the morning, provided I make a plan and start promptly.

Then came the pandemic. With nurseries throughout the UK closed, my partner and I shared childcare and split our working days for the best part of three months. The prevailing time-zone of (my teams at) my company is on the other side of the Atlantic, so the only sensible way to divide the day was for me to start work after lunch. If I ever wanted confirmation that the morning is my best time for productivity, taking the mornings away provided it. 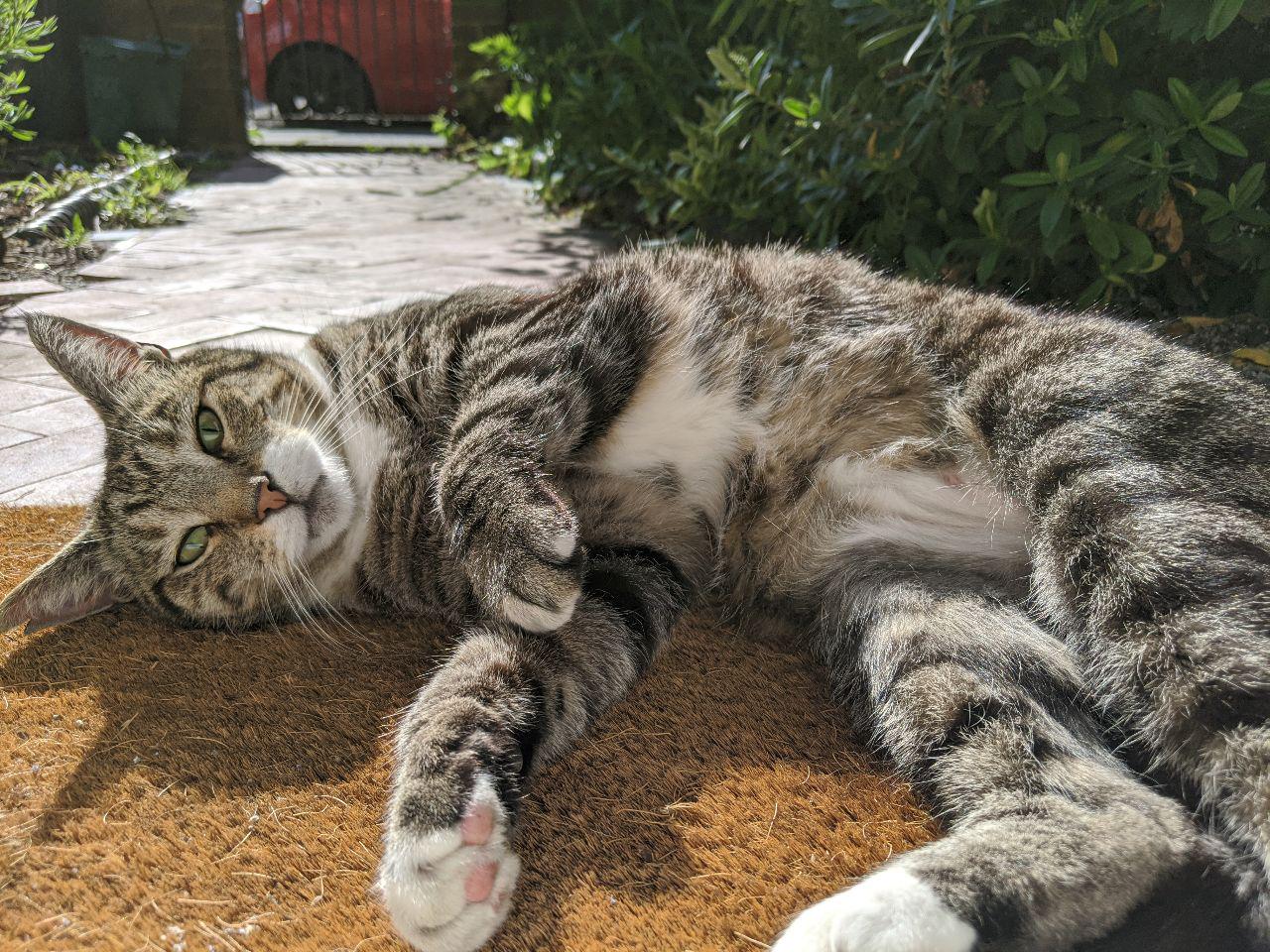 Now nurseries have reopened, and I have my mornings back for work. (Better than before, actually, because I cleared out most of my morning appointments.) The downside is that mornings were also the best time for playing in the sunshine.

The Problem With Saints

The chorus of this duet between Neil Gaiman (vocals) and Ben Folds (piano) popped into my head the other week and just won't leave. Is it wrong to sing “And the people that she hated will be neatly bifurcated” in the presence of a two-year-old?

What Makes Us Glow

In 2013, Psapp released the album What Makes Us Glow. My memory is a bit fuzzy but I must have bought some pre-order bundle including a tote bag, poster, release party gig ticket, and sheet music for the title track.

The launch gig was great, but I must have not been in the right mental space to appreciate the album at the time because it never really stuck. I don't think I even opened the sheet music back then.

The other day, my daughter found the sheet music on my shelf. She's fascinated by it, in part because it has cats on the cover, but also because the idea that music can be written down, read back and played is astonishing to her (as someone just learning to read letters and simple words). So, we've listened this song at least twice a day every day this week, with me showing her how I'm following the music and singing along. It's really grown on me.

On my phone, I have configured Digital Wellbeing to only allow me to use my RSS reader for 15 minutes per day. The timer resets at midnight. Last night I stopped work after midnight, and read some blogs to wind down. This evening, I discovered I'd effectively used today's allowance yesterday.

In a past life I used a timelogging tool to report what I'd worked on to my employer. It had a configurable “virtual midnight” feature which defaulted to 4am: work done before this time was considered to have happened the previous calender day. This was always super-buggy, but I came to realise the real bug is working late enough that it becomes an issue.

But, here we are again.

Every day I am reminded that it [Moby Dick] is part of our collective imagination: from newspaper leaders that evoke Ahab in the pursuit of the war on terror, to the ubiquitous chain of coffee shops named after the Pequod's first mate, Starbuck, where customers sip to a soundtrack generated by a great-nephew of author, Richard Melville Hall, better known as Moby.

— Leviathan, or, The Whale by Philip Hoare

It seems so obvious now I know.

His work showed that a cheesemaker selling cheese for $40 a pound could, with a proper fermentation system, make half again as much in retail sales on alcohol. In the last several years, he says, he’s been approached by more than a dozen creameries from across the country looking to ferment their whey into alcohol.

This is great and all, but why wouldn't you turn it all into brown cheese?

On the way home from nursery the day after we moved house, my daughter and I popped into M&S for some essential food supplies. We didn't hit the £20 threshold, but a very kind member of staff who complemented my daughter on her little red riding hood coat gave her a basil seed kit anyway.

7–14 days later, we're all staying at home with our coughs, and the first leaves have emerged. In a few days we can learn how to transfer the plant into a larger pot in the garden. We are so fortunate to be basically okay and have these small joys to lift our spirits. 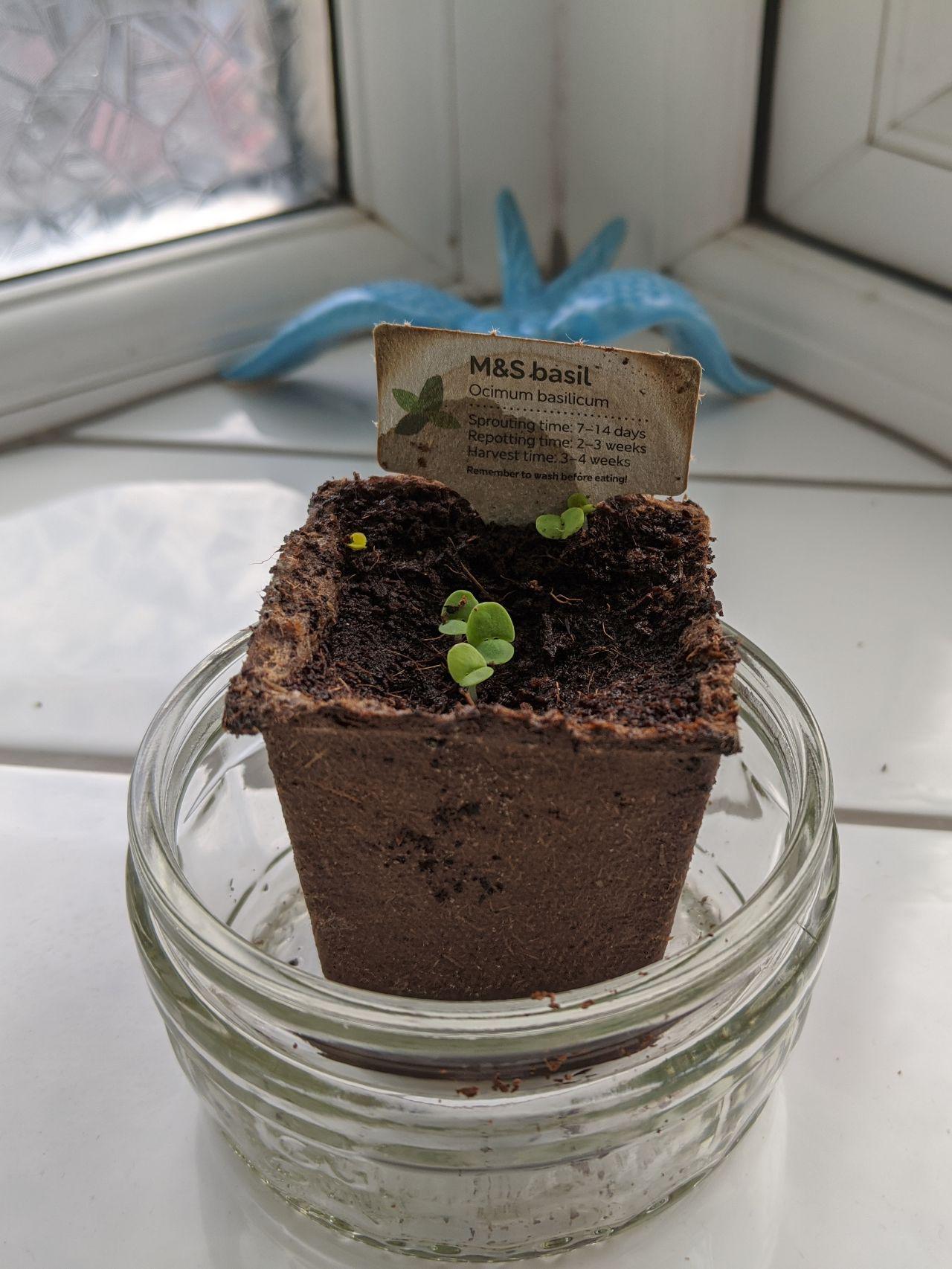 If you're in or near London, the Kew Orchid Festival is well worth a visit in the next 10 days. We didn't have a reservation and got lucky with a very short queue on a Sunday afternoon, but it was really crowded. If you can get there on a weekday, you'd have a better time.

The flowers are good and all that, but I also enjoyed these tiny pineapples, and the various bamboo animal friends lurking in the greenery. 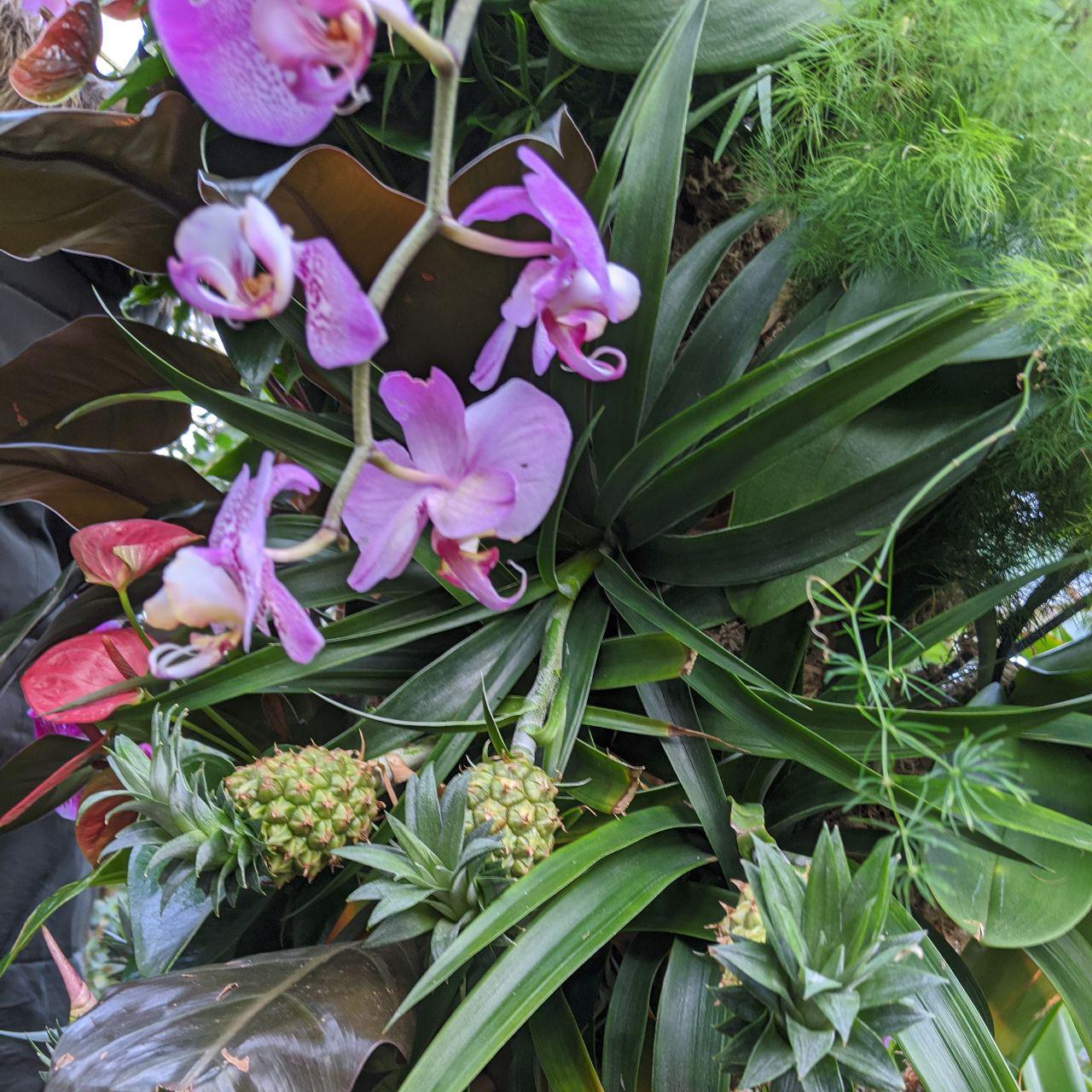 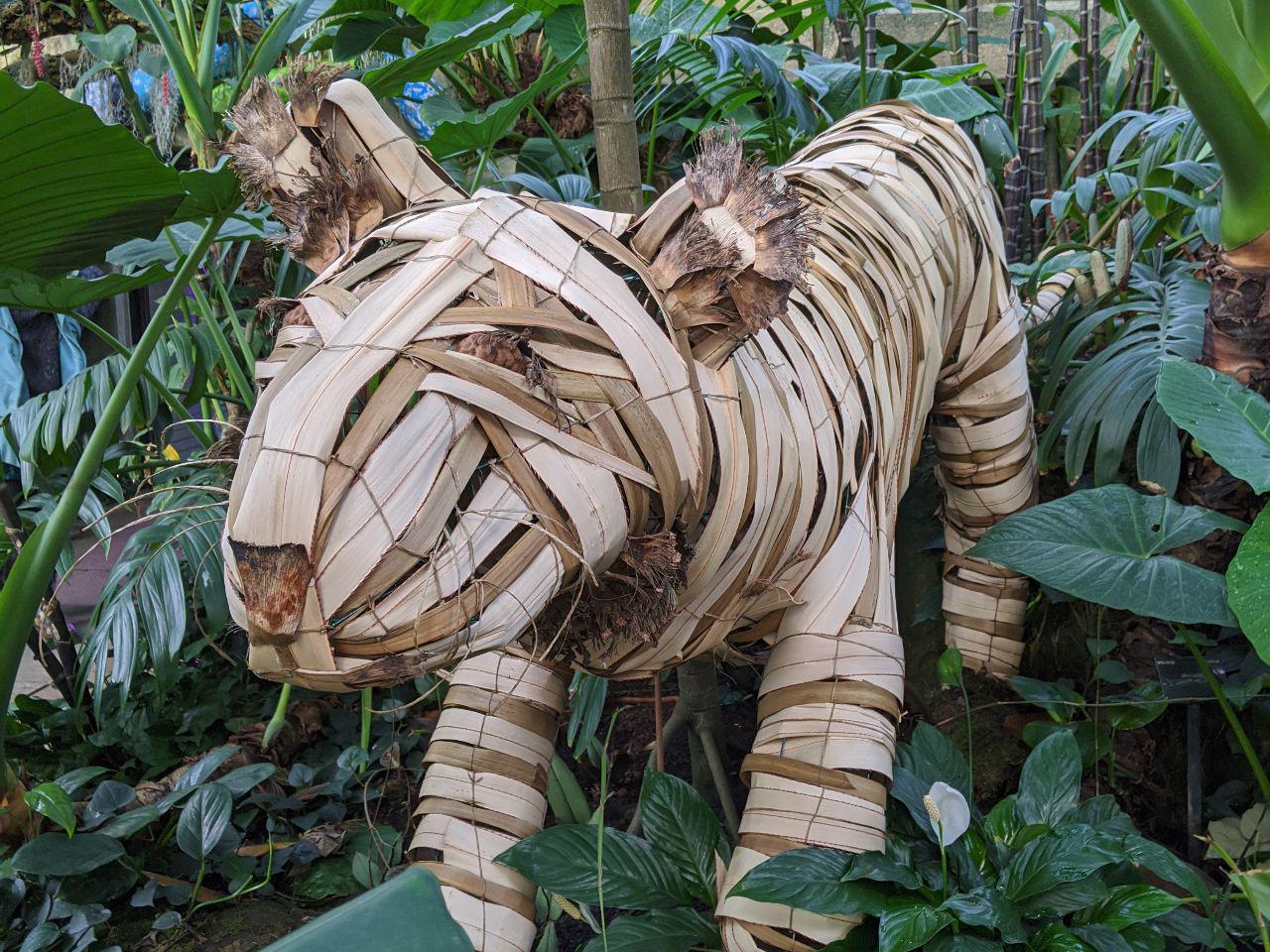 You will not be able to enjoy gamelan performed in the secluded garden summerhouse as we did, but apparently there will also be music at the evening Orchids: After Hours events. Maybe you can feast your ears on the pelog sunda scale there. The MIDI and solo gangsa recordings on Wikipedia sound weird to my Western-tuned ears in a way that hearing the full group perform did not.